Global warming may have allowed AL Gore to receive a global prize for his reporting but further investigation might prove Mr. Gore errs in his research.

In an article dated September 2007 the Christian Science Monitor had this to say:

Still, over the past decade some researchers say they’ve found puzzling correlations between changes in the sun’s output and weather and climate patterns on Earth. These links appear to rise above the level of misinterpreted data or faulty equipment.

“There are some empirical bits of evidence that show interesting relationships we don’t fully understand,” says Drew Shindell, a researcher at NASA’s Goddard Institute for Space Studies in New York.

For example, he cites a 2001 study in which scientists looked at cloud cover over the United States from 1900 to 1987 and found that average cloud cover increased and decreased in step with the sun’s 11-year sunspot cycle. The most plausible cause, they said: changes in the ultraviolet (UV) light the sun delivers to the stratosphere.

Clouds can cool, or clouds can heat

Others claim to have linked shifts in levels of cosmic rays reaching deep into the atmosphere to changes in average cloud cover. Depending on how thick and how high they are, clouds either cool the planet by reflecting sunlight back into space or act as a blanket and trap heat. The valve controlling the flow of cosmic rays from deep space is the sun’s magnetic field – which shifts with sunspot activity.

Admittedly there will be strong arguments against the sun’s effect’s in the global warming issue mostly from those who are receiving various awards and/or are writing books supporting their stand. But one last comment should at least cause one to further investigate the matter of sunspots and global warming:

Phil Chapman, geophysicist and astronautical engineer who lives in San Francisco, writes in The Australian about the frightening prospect that this year’s ferocious winter and decline in average temperature is the herald of serious cooling:

The sunspot number follows a cycle of somewhat variable length, averaging 11 years. The most recent minimum was in March last year. The new cycle, No.24, was supposed to start soon after that, with a gradual build-up in sunspot numbers.

It didn’t happen. The first sunspot appeared in January this year and lasted only two days. A tiny spot appeared last Monday but vanished within 24 hours. Another little spot appeared this Monday. Pray that there will be many more, and soon.

That the rapid temperature decline in 2007 coincided with the failure of cycle No.24 to begin on schedule is not proof of a causal connection but it is cause for concern.

It is time to put aside the global warming dogma, at least to begin contingency planning about what to do if we are moving into another little ice age, similar to the one that lasted from 1100 to 1850.

There is no doubt that the next little ice age would be much worse than the previous one and much more harmful than anything warming may do. There are many more people now and we have become dependent on a few temperate agricultural areas, especially in the US and Canada. Global warming would increase agricultural output, but global cooling will decrease it. 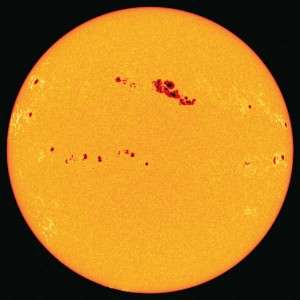