are sometimes maligned when it comes to their use for as base or portable antennas. While they may not be 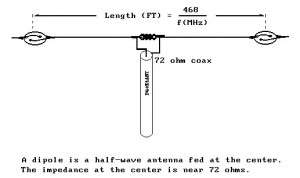 as attractive as a multi-element beam up at 40 feet plus they are certainly no less effective. A wire antenna

such as the dipole displayed to the right is a very effective antenna when cut for the frequency range you wish it to operate in. The majority of wire antennas you see will be for a single band meaning you will need an antenna for each band you will be operating on. There are some wire antennas that are deemed as multi-band when used with antenna tuner placed inline between the radio and the antenna. Wire antennas

like the dipole pictured above are simple to make using the formula: 468 / frequency (in megahertz). All you need to do is divide the number 468 with the frequency you wish to operate. Now take this measurement and cut a single wire to that length, next cut this wire exactly in half and separate the pieces with an insulator as shown in the picture. All you need now is to connect some coax (radio cable) to the antenna by affixing the center conductor to one leg of the antenna and the shield of the coax to the other leg.

One of the simplest antennas as listed above is the inverted vee, but there is yet another equally effective antenna which is the simple dipole mounted in a horizontal configuration. Same method of design and building as the inverted vee but it is the mounting that differs from the inverted vee. Instead of placing the middle of the antenna up high you make both ends of the antenna as high as possible and as near the same height as possible. One drawback to this type of dipole is that the center insulator must carry the weight of the two antenna ends as well as the coax feedline. The feedline for these antennas can add a lot of weight to the antennas when you consider a length of feedline needed for an antenna 50 feet or more in the air. This issue alone is worth considering the inverted vee mounting configuration (unless you use a rope to support the full length of the dipole).

. He has modeled many forms of this antenna and I would like to pass along some of his findings. All of the following were contained in a discussion forum on the QRP-L reflector, and were submitted by W4RNL (L.B.Cebik). For maximum vertically polarized radiation, the feedpoint should be 1/4 wavelength from the apex (whether pointed up or down).

The antenna should be relatively close to the ground. For a 40 meter model, 15 to 30 ft up to the bottom is max, and models

suggest that this scales for other bands. If higher at the bottom than about 0.2 wavelength, then a second high angle lobe develops, and stronger, closer in stations can override more distant stations, even if the lobe is not dominant in the pattern.

The Delta is at its limit on 20 meters of being a better DX antenna than a dipole, you will not get more gain from a Delta Loop over dipole, but it may exhibit a better signal to noise ratio – hence more comfortable listening.

THE DELTA LOOP IS A MONOBAND ANTENNA

Although the vertical-plane delta loop either pointed up or down and fed virtually anywhere will radiate well enough to provide contacts, it is a relatively poor performer in any configuration when stretched to other bands, compared to even the simplest substitute. Modeling of Delta Loops and similar antennas has proven to be a quite reliable indicator of performance, since nothing in the antenna type even approaches, let alone exceeds, the limits of the software for accurate modeling. So the following notes may be useful. These notes apply to vertical-plane equilateral delta triangles, although with some variation, they apply equally well to vertical-plane right angle deltas. Modeling was done on NEC 42.

First, the antenna. A vertical-plane equilateral delta for 40 meters will be about 48ft 5in wide and 42ft high. This places limits on the height above ground of the lowest point, since with a 35ft low-point height, the high point is 77ft up. For the examples below, a standardized 15ft bottom point is used, with a 57ft upper point.

How To Get My Wire Antenna Up High

Leave it to some people to use the materials at hand to make a difficult task easy. In this case you can use a converted fishing reel to launch the leader for the antenna line up into a tree and then pull the antenna up in place. More antenna about launching and mounting dipole antennas can be found here: mounting wire antennas.

2NEC 4 The Numerical Electromagnetics Code (NEC) is a popular antenna modeling software package for wire and surface antennas. It is credited to Gerald J. Burke and Andrew J. Poggio, and was originally written in FORTRAN in the 1970s. The code was made publicly available for general use and has subsequently been distributed for many computer platforms from mainframes to PCs.