The folks here at RadioSurvivalist.com asked me to send in a blog post about the 43 foot antenna I posted on my web site at KK3Q.net. I lost all my antennas after the hurricanes of 2005 so I needed something else to put up to where I could take them down once the storms head in our direction. After losing the wires from my 2 element quad I threw a rope over the boom of the quad and pulled a G5RV antenna up so I could get back on the air. This was in 2006 and the digital modes were taking a firm grip on people’s operating on the bands. One night on PSK I worked a fellow in North Carolina and his signal was tremendous so I asked him what antenna he was using and he said it was a ZeroFive, an antenna I never heard of before. The next day I got on the Internet and found the ZeroFive web site. After some more checking around I decided the 05 was the antenna for me and sent off for it.

When the package arrived I was a bit disappointed, the box looked way too small to be holding all the pieces of a 43 foot antenna. Boy was I surprised. The antenna was the easiest HF antenna I’ve ever built and I’ve built my share of them. No more than 45 minutes later I was raising the antenna up into place using the fold-over base supplied with the 05. This feature was something I needed so I could drop the antenna should a hurricane head our direction. Those of you unfamiliar with hurricanes don’t understand it but we have plenty of time to prepare for the arrival of hurricanes. Unlike tornadoes which are like your brother-in-law showing up unexpectedly with an idea of staying a month. This antenna of mine has been lowered for storms and moved to several different QTH locations without a bit of trouble. One note: going up/coming down must be done smoothly and evenly. There’s 43 feet of aluminum you’re handling and it bows a bit so be gentle. Once it’s up it’s like a rock.

As I mentioned before the antenna went up quite easily because they mark each piece with heavy black marker so you know how far into the next size tuning the piece should go. No instructions 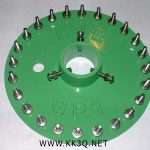 are needed, the tubes will only fit the two tubes they are cut for. Once the tubes are situated you simply tighten the hose clamps and you’re done. The tilt-over base is built like Mack truck, 2 large bolts hold the 05 in place. I might add that this antenna, despite its size, is easy for one person to put up or take down including the tilt base feature. When I bought the 05 they were selling a radial plate made by a fellow out in the mid-west who is now SK. It’s a real shame because it’s cheaper and sturdier than the stainless steel radial plates you see being peddled today by various vendors. The picture to the right of this text shows the radial plate after I powdercoated it and replaced the screws with longer stainless bolts as I planned on laying down a hundred radials under the 05.

Unlike a lot of hams I planned on laying the radials on the ground and then letting Mother Nature cover them up with grass. It was fall when I began this antenna project so I took the lawn mower out back and scalped the back yard down to the sandy surface. I used 12 gauge solid copper wire for the radials (yes, they were $$$) and started out with 25 radials. I had originally planned on 100 radials like the broadcaster use but I wanted to be sure it was going to worth the time, effort and expense. I bolted a soldered connector onto the radial plate and walked to the fence on our property. I then cut the wire and stuck a large (8″) nail in the wire connector to hold it in place. To help Mother Nature I used 6″ lawn staples to hold the wire down on the surface. How long were the radials? I walked to the fence from the antenna and cut the wire. And you’re right, everyone told me that was the wrong way to do it including one shack-on-belt Extra class op whose idea of DX is hitting the repeater in the next county. More on the performance later. As I said, I started with 25 radials and when I had them down I worked on the ground system for the 05 itself.

With the LDG auto-tuner in place I fired the antenna up on 40 meters that night. I was pleasantly surprised in the contacts made on 40 meters. I ran it this way for about three weeks and decided to double the number of radials. At 50 radials I found a noticeable improvement in the performance of the 05 both in transmit and receive as well. Then the antenna experts came out of the woodwork once the locals found out I was using the 05. One fellow announced the radial arrangements I used would never work because I didn’t cut the radials to a certain frequency. This coming from a man who has a 2M/440 antenna on his mobile and a 10 meter vertical up at 15 feet and a couple of HT’s on his belt. The next critic accused me of using an amp after hearing me working some DX one afternoon. He called me on the phone and asked about the antenna wondering how I was working DX he couldn’t hear on his beam on a 90 foot tower. I guess he never realized propagation changes and a beam on a tower does not guarantee communications. During the call he asked if he could come to see the antenna, one thing he didn’t know was I wasn’t going to allow him to see my station. He could take my word I didn’t run an amp or not, didn’t matter to me. My last amp, a Heath SB-220 I built, was sold in the late 90’s. So, this man came over to see the 05 and was amazed it has no gimmicks. No tuning coils. No traps. He put his hands on the lower sections of the 05 and looked up still unbelieving the antenna worked so well. Even so, he heard me working these stations and some, such as VP6DX were verifiable via their web site and the locals were keeping track of each other’s progress. To this day the other fellow believes I ran an amp so there’s nothing I can do to change his mind.

I have moved the antenna several times and I have developed an easier method of sinking the 1.5″ pipe into the ground that the tilt-over base. I leave the radial plate and tilt-over base and the radial plate in place. Next I find the spot where I want to sink the pipe, I hold the pipe at an angle to where I can insert a water hose down the length of the pipe. With a helper stationed at the faucet I signal them to turn on the water and then I hold the pipe vertically. Within a minute the pipe is down into the ground without any digging. Next the ground rod, I am a believer in grounding every part of my station.

The radials of a vertical are the labor intensive part, no matter who makes the vertical. Years ago I used a Butternut vertical with buried radials. While the Butternut worked well the process of using a lawn edger to slit the grass for the radials proved to be less than effective. Cable and telephone lines are supposedly buried 18 inches from the surface and yet I cut both the cable and phones lines for our house with an ordinary lawn edger. Most lawn edgers cut between 1 to 1.5″ deep and yet I cut two wires with it. After that I only use the radials on top of the surface system for my radials.

As for the radials I added another 25 radials bringing the total to 75. I didn’t see much of an improvement so I abandoned the test with 100 radials because of the high cost of 12 gauge solid copper wire.

We’ve all heard the detractors when it comes to vertical antennas for HF use, the most popular being “a vertical radiates equally poor in all directions” followed closely by “a vertical picks up too much noise to be effective.” This may or may not be true of other vertical antennas yet it does not describe the 05 at all. The antenna system consists of more than the antenna and that is where many installations fail through the use of low quality coax, poor grounding, poor location, poor antenna assembly techniques and a host of other issues that will cause any antenna to perform poorly.

One last thing is the experts who have proclaimed the 43 foot antenna an ineffective antenna. Some going as far as saying it won’t work. Many compare the 43 foot ZeroFive antenna to the BigIT antenna and state the BigIR is the best choice between the 2. Hogwash. The BigIR is priced at $1150. and up for 40 through 6 meters. The ZeroFive is $349 as of the date of this post and that’s an antenna that doesn’t need special control cables and control boxes. The 05 doesn’t suffer from worn parts and fiberglass deterioration either. No… I’ll stick with my 05 built like a Mack truck rather than a high maintenance BigIR. There are several major companies producing 43 foot antennas albeit none have the quality of the ZeroFive.

Good For Survivalist / Off Grid Use?

Is the 05 good for survivalist applications? I wouldn’t think so, while it’s sort of portable the radials would tend to hamper its operation. Would it be good for off-grid use? Absolutely. Why? The thing is hard to see even when you know it’s there. If you had one near the trees and painted it you’d be hard pressed-to find it. Many HOA crippled hams use it on the back of their property after painting it a color to blend in with surrounding area.