Just as the name implies the “loop antenna

” is an antenna made in some configuration of a loop. That’s a rather simplistic description of an effective antenna. These configurations aren’t necessarily round in shape, many people use lengths of copper tubing/pipe combined with 45 degree elbows to create the loop. There are some loop antennas which are actually round but they were built by someone with access to a tubing bender capable of bending copper.


Why are loop antennas mentioned on this web site? They would be difficult to use for in the field applications such as survivalists would encounter. But those that are staying put during SHTF, or those with nosy neighbors (or nazi HOAs) may want to look at the loop antenna. It isn’t an inexpensive antenna considering the cost of copper these days but still worth a look. To keep from blathering on about loop antennas a list of external web sites is posted below:

Some of these links may be dead, please contact us if you find a dead link so we can remove it from the site. 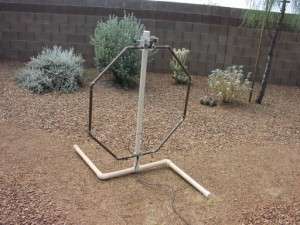