Stealth: stealthy – furtive or surreptitiously, denoted or otherwise marked by quiet, caution, and secrecy, it can also mean to take great pains to avoid being observed;

. The very best communications antenna for a survivalist is one that no one can see. You know yourself that paranoia will run rampant and anything seen as a “threat” will be reported. The last thing you want to do is to draw attention to yourself or your location by having a huge antenna sticking up in the air. Sure, the big antennas work so much better but they also tend to attract unwanted attention. So with this page we will show you some antennas that will perform very well for the bands they are created for and yet will not draw a lot of attention.

. The article is entitled: “Secrets of a Successful Stealth Operator“.

What is it? Put simply, it is an end-fed, longwire antenna that is laid right on the grass. Hence the name. The original grasswire used by K3MT in the summer of 1988 was just 204′ of #18 AWG magnet wire laid along the property line, anywhere from 1″ to 6″ above the ground. This sketch shows plan and elevation views of a typical installation. Both an 8′ ground rod and optional counterpoise wires are shown. Use one or the other. Both are not needed. (Click the image for a better view of the Grasswire Antenna.)

are very effective small antennas. these 3 to 3 1/2+ foot antennas perform close to and in some cases (low mounting heights for one) better than even a small beam. The reason is that a magnetic field is much more concentrated than an electrical one, for example a small horizontal loop at 17 feet performs better (lower radiation angle) than a full size dipole at 35 feet, in fact better for DX than a beam at that height because of the much lower takeoff angle. If you place a beam 1 foot off the ground it will only radiate straight up while a vertical loop will still work DX stations

quite well. This smaller more intense magnetic field also has the advantage of greatly reducing TVI – RFI potential if the loop is more than 15 feet or so away from TV antennas, electronics etc. Another advantage of this magnetic field is the very low background noise heard on the loop because most man made noise is electrical fields. For example if you lived next to a Shopping Mall the loop would not hear all that lighting and power transformers. Also reducing interference is the loops “Hi Q” which means that it receives & transmits on a narrow band range compared to the “full size” antennas. This effect is very pronounced on the lower bands that the loop will work.

Antennas outside ? Not here ! Well you might be surprised. There are many methods to get your antennas out in the free air. The key here is do the very best you can to blend in or conceal your installation. Do your best not to attract attention. Install your antenna at night if possible, another way is to mix it in with some other project like painting, repairs or hanging Christmas lights.

A little paint does very little to your RF efficiency but goes a long way to disguise your antennas. Since my house is in the clear with few trees I use a blue-gray color that blends into the sky and in my case my house. Use a flat color if possible. Also there is a line of camouflage paints that are made for cars that are great around foliage, fences or decks. Experiment by painting boards to see what will work best for you.

Radials: On HF the length of the radials on the ground is is not as critical because the earth detunes them. Run as many as you can as close as you can to the 1/4 wave length for your lowest frequency. I would suggest that you bury them down about 1 inch. Radiator(s): On VHF & UHF full size and radiators are usually fairly easy to hide. For example use 3/16 rod instead of 1/2″ tubing for your J-pole and paint to match, or hide it in a fake roof vent. Several amateurs have built 1/4 and even 5/8 wave antennas into a working wind vane. On HF verticals

can be built into “birdhouses” on a pole, these can be full sized on 10 meters or so and loaded or capacitance hats in the “house” itself for other bands. A popular theme is the flagpole antenna

. One design for a multi-band version is in the ARRL antenna book, it consists of a pole made of PVC with home made traps inside. Another good way is to feed a ground isolated 26 foot pole against a radial system with a concealed remote turner at its base. Also a wire radial can be run up a wood flag pole. Coax

Dipoles can be very effective and also being balanced usually are some of the cleanest in terms of TVI and RFI. The eves of your house is a good spot to hide a dipole, just staple it up there and paint to match. Also a dipole laid flat on your roof can have good results. Inverted Vee configurations tend to work best to stateside contacts while flat tops high in the air work best for DX. A surprisingly good choice is the “invisible wire”, small gauge wire as small as 30 gauge can be used if suspended properly, I suggest 26 gauge magnet wire. These small wire sizes will create some loss but not too much until you get to the low bands and even there will work OK. Also 18 gauge or so wire can be used and allowed to oxidize to have no reflection of sunlight. Caution with colors is necessary to prevent birds from running into your wire. I found light green is invisible to our feathered friends but they avoid dark green. These antennas can be supported by trees, fences etc. Fishing line is very useful for tying to structures and pulleys with small springs or weights can be used to let the dipole move in the wind without stretching. Feed line: A little care is needed here, be careful of running parallel to electrical lines or duct work if using balanced lines. Use the best coax or twin lead you can but if you can use 300 ohm TV lead with some loss for easy routing.

This is a bit tougher, VHF & UHF beams

can be hidden from view behind chimneys or trees. HF beams even on 10m are big and hard to camouflage but a clever ham could possibly shorten one to look like a TV antenna. I expect to see more antennas like the new Hy-Gain 2/6 meter beam that looks a lot like a TV yagi and lets you take advantage of the Communication act of 1996. This FCC ruling states that if you own your property you can have a outdoor TV antenna 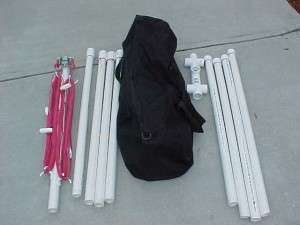 BuddiPole – It’s a dipole… It’s a vertical… It fits in your travel bag! The Buddipole

™ is more than an antenna, it’s a versatile system for launching your signal. Optimized for transmit power and proven for DX work, the Buddipole™ is the secret weapon used by HF portable operators all around the world. Precision engineered for maximum performance using ultra light composite materials and High-Q coils. Zero-loss balun with Quick-Connect feedpoint.


The CliffDweller II is the Original variable length HF antenna that adjusts it’s size to fit YOUR operating environment. 6 to 80 Mtrs. – QRP to 100 Watts – Anywhere you need it.
Composed of 130 feet of wire (a full half wavelength on 80 mtrs!), the CliffDweller II operates in as little as 16 feet (8 feet per side) to a fully extended length of 50 feet (25 feet per side) or anywhere in between. It works in any space you have available!

For traveling or for storage, fully compressed (as shown), the CliffDweller II takes up less than one foot of space. Take it with you anywhere you’ll need an HF antenna. Operates great in permanent or portable operation. Makes a great emergency “have on hand” antenna – used by several emergency ham services around the country.

The Force 12 flagpole antenna is a large diameter aluminum pole that is the actual antenna. It is not a plastic tube with a wire inside. The Force 12 flagpole is an effective antenna and is a solution for many people who live in restricted areas, while allowing us to be patriotic. The basic flagpole antenna system is composed of the flagpole, the radials and the feed line. The optional feed point kit contains a feed point pigtail that connects the flagpole to the coax feed line and four (4) radials.

One of the best choices in stealth antennas is those produced by the Zero Five antenna company. Their antennas are quite hard to discern and can be made even more stealthy by applying a coat of paint that coincides with the surrounding areas. Zero Five also sells flagpole antennas that are virtually impossible to discern with Old Glory displayed on them. We have a little more detail on the Zero Five antennas on this link: Zero Five Antennas.