is a company known as a manufacturer of communication devices for the amateur radio bands and for business use also. We’ll cover and little bit about the business use of Alinco radios first even though they have little use to a prepper and/or survivalist.

Alinco’s amateur radio offerings is similar to its business band offerings except for the HF transceivers and shortwave receivers. As of this writing they offer two different HF transceivers which can be used as either a mobile or a base station depending upon the needs of the prepper or survivalist. We’ll start with the model designation
DX-SR8T/

E which is listed as an “All-mode Desktop Transceiver.” This amateur band transceiver covers 1.9 megahertz up to 29 megahertz using the following modes: SSB (which is normally referred to as “phone”), CW (the amateur radio shorthand for Morse code), as well as AM/FM. This radio is obviously a clone of the popular Icom IC-718 radio.

Their next offering is pretty much an upgraded DX-SR8T/E since it pretty much shares the same model number: DX-SR9T/E. The DX-SR9T/E has one feature that the DX-SR8T/E does not have which is SDR. SDR stands for software defined radio. Whether or not SDR is attractive or can be used SHTF scenarios is debatable. One can only guess SDR would be a personal preference on the part of the prepper. Survivalists may or may not care about the inclusion of SDR in this Alinco transceiver. 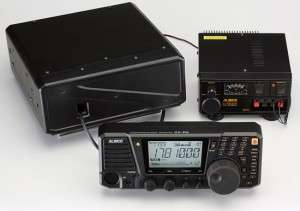